My new book about creating an Alexa Flash Briefing

On October 11th, I published my new book titled: How to Reach a New Audience of 30 Million Listeners with an Alexa Flash Briefing Skill Created in 1 Hour If You Already Have a Podcast (1 Week If You Don’t) 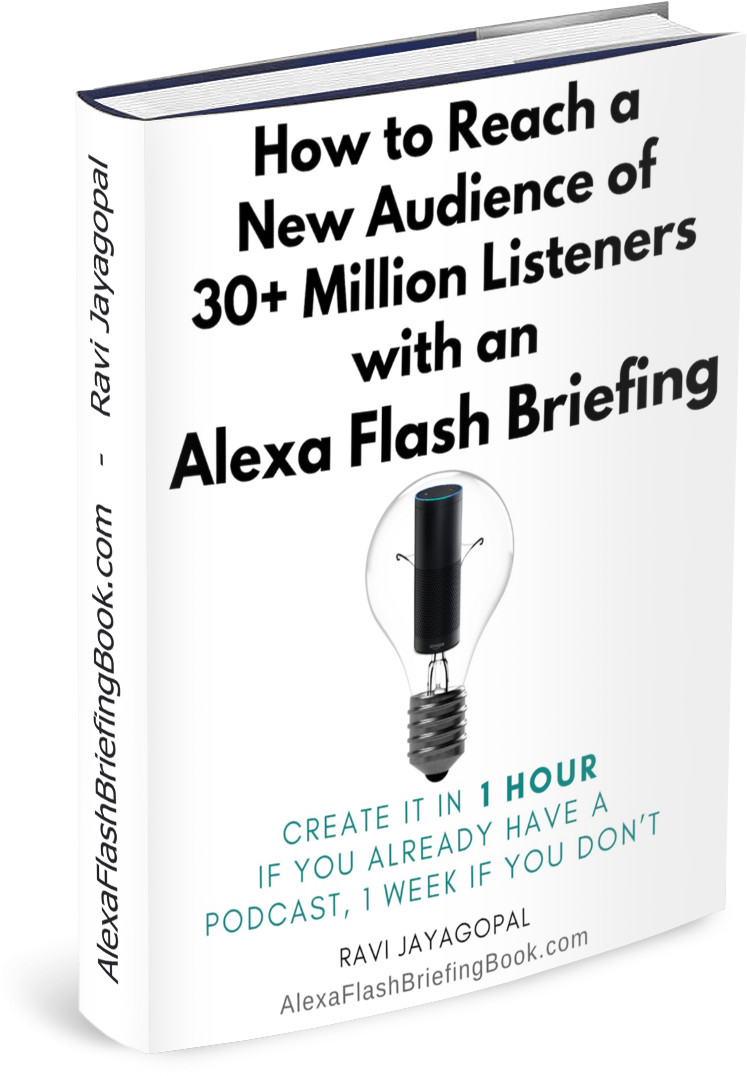 Here are a few key excerpts from my book.

What is an Alexa Flash Briefing?
It is basically a short clip of audio, a “micro-podcast”, if you will - like, top news headlines, word of the day, inspirational quote of the day, thought for the day, prayer for the day - something that delivers a quick, concentrated dose of value to the listener in a couple of minutes. Like “Traffic & Weather at the top of the hour” on radio – quick, short, to-the-point, no fluff, just a concentrated dose of value.

Don’t need an Alexa
Just like you don’t need an actual Kindle device to read a Kindle book, and you can download the Kindle app on your regular computer, and iPhone and Android devices, and read Kindle books on all of those devices - the same way, you don’t actually need an Alexa device to use Alexa and ask “her” questions, and listen to an Alexa Flash Briefing.

Better than TV News & Podcasts (For What It Is Meant For)

The original idea behind this concept is to entertain, educate, engage, enrich or help evolve your listener, who’s probably getting ready in the morning to go to work. So as they’re brushing their teeth, showering, getting ready, making coffee, they can say out loud “Alexa, what’s my flash briefing?” and their Alexa-powered device – whether it’s the Echo Spot, Show, Plus, or other – will start playing all of the flash briefings that they’ve “enabled” in their Alexa app (or Alexa web), one after the other, in succession.

So in a way, it’s similar to a podcast, because you basically subscribe to a bunch of Flash Briefings (just like you subscribe to a bunch of podcasts), and you listen to them one after the other, until you hit stop – or in Alexa’s case, you say “Alexa, stop” or “Alexa, cancel”. And to skip the current one and start playing the next flash briefing, you would say “Alexa, skip”. As simple as that.

But when it comes to the format of Flash Briefings – basically getting quick updates on a whole bunch of things on a whole bunch of topics, all within a short span of time – it can be more powerful than podcasts, because podcasts are not as quick to get into the meat of the content. There are extended intros, small talk, set up talk, announcements and updates, multiple ads or promotions, and so on. So it’s like a “Podcast on Steroids” (your truly, again :-)).

Alexa Flash Briefings are the exact opposite: You literally have only a few minutes to deliver content. Even though Amazon says you can have content for up to 10 minutes long, Flash Briefing listeners are not going to be interested in long-form content when it comes to this particular platform – they might as well listen to regular podcasts if that’s the case.

Instead, Flash Briefing-listeners may have subscribed to 3 or 5 or 10 Flash Briefings, and they want to get through all of them quickly. It’s like writing a Tweet vs. writing a blog post (unless you’re Seth Godin, whose blog posts can be like Tweets :-)) - you only have a short number of characters available for your tweet, so people try to (and forced to) get really creative, get to the point fast and keep it short.

Similarly, because of the short-form nature of Alexa Flash Briefings, as a listener, they know they can expect maximum value (whatever that “value” you’re promising them in your show’s title and description) in minimum time, minus all the fluff.

Why Create an Alexa Flash Briefing
I talked about this on Episode #73 of my podcast, titled “Audio and Voice Are The Future, All-In On Audio”. Give it a listen at https://subscribeme.fm/audio-and-voice-are-the-future/

As powerful as video is, Audio can go where Video can NOT go - like when you’re driving to work, doing the dishes, in the gym, on a run, walking your dog, cleaning the garage, heck, even when showering!

If you’ve seen any science fiction movie, you have seen a super-smart voice assistant. The Computer from Star Trek, Jarvis in Iron Man. And that’s what is coming soon to a world near you.

Voice is the most natural and most powerful form of communication. Which is why I believe that audio is going to be one of the most powerful tools of the future.

An article from eMarketer.com states, “Not since the smartphone has any tech device been adopted as quickly as the smart speaker.” And it goes on to say how they expect the number of US smart speaker users to grow at the rate of 47.9% between 2016 and 2020, and end up around 76.5 million.

And according to Slate.com, "smart speakers, like smartphones, aren’t just about the hardware. They’re about the platform that powers them—in this case, the voice A.I.—and how it shapes users’ behavior. When you buy an Echo, you’re paying Amazon $85 today. But it also gives you a strong incentive to pay it $120 a year for Amazon Prime, and perhaps another $80 per year for Amazon Music Unlimited. On top of that, it makes it very easy to buy things on Amazon, and plays nicely with other Alexa devices like the Fire TV.

Purchase a Google Home, on the other hand, and it will fit right in with Chromecast, YouTube, your Gmail and Google Calendar, and the Google Assistant on your Android device. A HomePod will deepen your relationship with Siri and iTunes, and so forth." And it goes on to say “Google, whose business revolves around targeted advertising, already knows what we’re searching for on the web and what we’re doing on our Android phones. It would love to know what we’re up to in our kitchens and living rooms too.”

A little while ago, I got my first smartspeaker – an Amazon Echo, which of course, is powered by Alexa inside. I think it’s pretty cool. I don’t have any home integrations yet. Who knows, I might end up buying one of each - Alexa, Google Home and Apple HomePod. As the competition heats up, the consumer wins, at least as long as we don’t look under the hood and realize how much information these devices are collecting about us.

And doesn’t matter which device ends up with the bigger share. Do you know what I’m counting on? I’m counting on all of them having some kind of a morning news flash kind of service. And that means, since I’ve already created a podcast feed for Alexa (which is my Flash Briefing), I can literally, within 10 minutes, whip up a new feed (or even re-use the same feed) to submit to any future news flash service that is launched, because I have all of my content ready.

And I’ve tried to make my show as evergreen as possible - not too many references to current dates or events. So it wouldn’t hard for me to repurpose my Alexa Flash Briefing into a Google Home or Siri News Update, or whatever they decide to call it.

I know its coming. Just a matter of when, and not if.

So as Amazon, Google and Apple duke it out, with Amazon having the biggest share and most integrations with their smart speaker for now (at the time of writing this), and Google hot on its heels, and Apple waiting to unless its trillion dollar Kraken on the world of AI (artificial intelligence), I can’t wait for AI to get more powerful and ubiquitous so I can simply speak to a device that can actually get things done for me. And I want to be able to do that using not just simple one-way commands, but more advanced natural language, like having a conversation, where the device knows the context of this ongoing conversation.

Much like Scarlett Johansson’s Samantha, in the movie Her. And if you haven’t seen that movie, you should check it out. I loved it. Joaquin Phoenix is absolutely amazing in that, and so is ScarJo’s voice. Yeah, I said ScarJo, cuz guess what, I’m in the know! Booyah!

And if you haven’t watched Ex-Machina, you should. I absolutely loved it. Obviously, my wife would literally kill me before letting a beautiful Alicia Vikander-robot in my house. Or even a sexy ScarJo voice-only robot. But that’s the story for another day.

For now… What would you rather compete with?

Audio is about to become the future, so get in now. And that’s why I’m all in on Audio.

According to research company Gartner, “By 2020, 30% of web browsing sessions will be done without a screen.”

2020 is not very far off you know. So in just about a year and a half, a third of web browsing will happen with just voice, and no screens, no typing. Just talking.

Which is why, it’s a great time start thinking about launching a podcast, or at least, a flash briefing, if you don’t have one already.

That’s how much I believe in the future of Voice, Voice-assistants, and Podcasts.

Reaching a New Audience
According to the Smart Audio Report by NPR and Edison Research, it looks like older adults (35-55+) initiated the first wave, and now younger adults (18-34) are catching up. So that’s great news for us creators: We’ve got both older and younger audiences covered. Another key to the demographic of Alexa Flash Briefing’s is that the audience is apparently decently well off (they paid for a voice assistant, after all, which is not exactly a must-have today, in the world of new iGadgets and other electronic gadgets and toys that are more prevalent), they are intellectually aware and mature (they realize they can use audio to catch up on news, entertainment and education, etc, while doing other things - just like podcast listeners). So they realize the value of time, and the value of audio, and can pay for things. So all of that makes for a much more compelling audience demo, I think.

A phenomenal audience of 30+ million educated, informed, intellectually curious, self-aware, tech-savvy, audience who can afford to pay for stuff, is awaiting for us. We just have to get over the mental hurdles of “New & Noteworthy” and “Ratings & Reviews” and “Twitter-bombing” and “Facebook-blasting”, and stop penny-stock trading, and stop focusing on so much on just relentless creation, and start focusing on distribution and promotion.

I downloaded Ravi’s book and read it on my Android phone. That’s not the best way to see his screenshots! It’s a quick read, though - and a potentially large audience

I’m trying to decide if I can to repurpose my 5-7 minute audio interviews for Alexa Flash Briefings, cutting out the intro and just keeping the good stuff. Maybe they’ll give me an Alexa, too!

Alexa Flash Briefing’s can be tricky - not suitable for all niches. So it’s more of a case-by-case thing for now.

Unless there’s enough content to publish 3-5 times a week, and unless you have the time to put into creating for another platform, I would hold off on that for now. If you have limited time and resources, then it’s best to focus on what you already have got going, especially given the niche that you’re in.

Again, this is not something that can be easily determined without a 1-on-1 conversation. So given what I know from our past coaching calls, I would say hold off on creating a Flash Briefing for now.

Looking forward to reading it. Just bought it on the kindle…

Thanks, Sandi @kissyourweb. Let me know what you think. And if you find it useful, would love it if you could leave a review for me on Amazon. No obligations though. Only if and when you can get to it.